Every fitness blog, website, magazine, as well as talk shows are all talking about this new fitness method. Basically, the DUP method is a fitness method that is based on Daily Undulating Periodization (D.U.P.) to help a person get stronger in the right way and at the same time avoid plateaus which slow down progress as is common with the most traditional fitness programs. 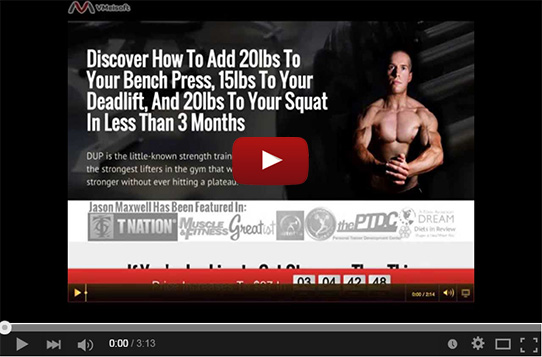 Ideally, the method goes against what has been the norm or rather the abcd of body building. The method argues that the traditional advice in body building where you are required to exercise every muscle group once a week, carry out different work outs so as to hit your target muscles from all angles, resting for at least 5 days between working body parts to allow sufficient recovery as well as programming your exercises in the hypertrophy range of between 8 and 12 reps per set is wrong.

Simply put, the DUP method is against the teachings of mainstream bodybuilding programs we have known over the years.

The Brains behind DUP Method

This potentially revolutionary program is the brain child of Mike Samuels and Jason Maxwell. Mike is a personal trainer and diet coach.

Mike is also a professional power lifter who currently holds the under 23-bench press record for South East England. His writing work on power training and body lifting has been featured on Livingstrong.com, T-Nation, The Personal Trainer Development Centre, Elite FTS as well as on the Layne Nortons website among others.

On the other hand, the story behind Jason is a bit hilarious since he is a Rocket scientist turned fitness guru. Jason graduated top 3 of his class with a bachelor of Engineering.

He is certified through the National Strength and Conditioning Association and Functional Movements and holds a master’s level nutrition certification.

What the Program Includes

The DUP method is a digital application which a user has to purchase first. Once purchased, you receive complete access to it. The program is simple and easy to follow.

It contains a detailed explanation of work outs and nutritional plans that have been carefully researched using the latest science. The DUP method can be accessed through computers, tablets, and even smart phones. 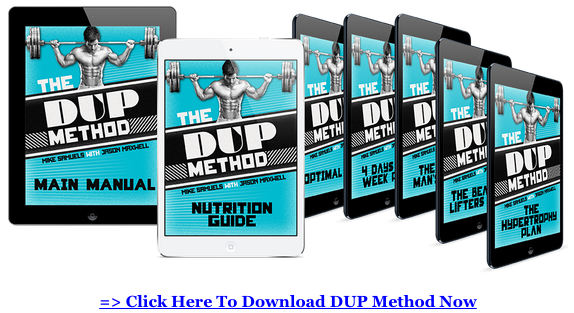 It has seven essential components and additional bonus items all in a bid to help people understand and adopt this new work out program. The first component is the main manual which is shows how to use DUP Method correctly and efficiently.

It is followed by a nutritional guide that guides DUP method users on what to eat while involved in DUP exercises. The third component is a printable work out log for ease of access and mobility.

This work out program is supposed to be achieved five times a week. The fourth component is a condensed work out log and should be done four times a week, both work out logs are essential in different parts of the program.

Components five to seven are work out logs for the busy man, Beat Up Lifters and the Hypertrophy ones respectively.

In addition, the DUP method comes with three bonus videos. The first video guides users on how to do bench presses correctly, the second video takes users through a squatting work-out while the third is a deadlift guide.

Far from it, the DUP method is not a scam in any sense. It works through high frequency training strategies. An individual is supposed to exercise muscle groups frequently.

If it is lifting, one is supposed to do it three to five times every week. By doing this, a user is able to attain strength fast without hitting a plateau.

A plateau is a period when despite exercising there are no visible gains. Essentially, DUP advocates for training the same group muscles often including performing same exercises on consecutive days, adopting a limited number of exercises, working maximally, and programming in periods of overreaching as well as exercising in a variety of rep ranges at varying degrees of intensity.

Who is the Ideal Candidate?

The DUP method is ideal to all men and women looking to lose fat, build muscle get stronger and faster as well as those looking to build their endurance.

That said, it is ideal for all kinds of users and surely worth a try. In fact many top athletes are currently using the method to improve their performances.

Does the Method Work?

Yes it does. Though most people hit out the gym with the goal of building muscle and in turn get stronger, they fail to achieve their goals since they mostly follow outdated training methods.

In the long run they end up hurting themselves rather than achieving any gains. The good news is that with the DUP program, they can now achieve their goals faster and more efficiently.

I would recommend every person looking to work out for any particular reason to check out this method. If you don’t understand the exercises, consult your trainer to help you.

You have nothing to lose and potentially you stand to gain a lot. The DUP method even comes with a 2 months money back guarantee.

Therefore, you can have peace of mind knowing that in case the program does not work for you, you can return it and get a refund.